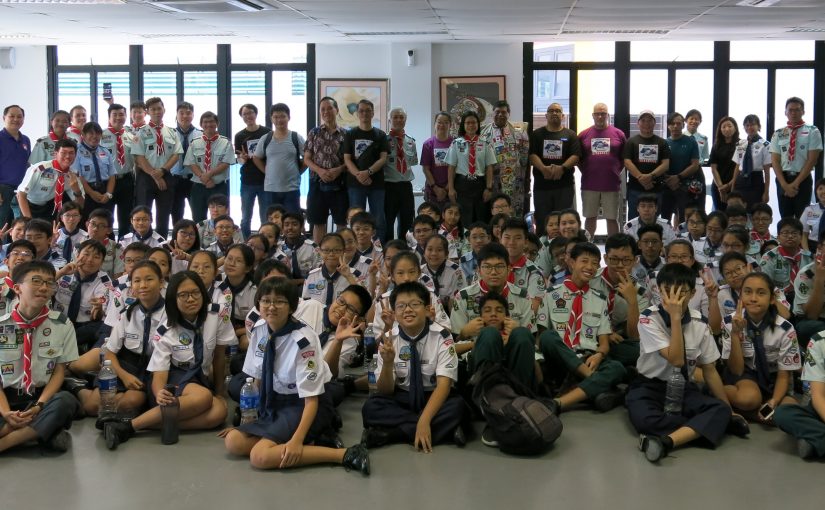 I’m so glad we made JOTA SG 2019 a dream come true. We managed to bring the radio aspect back into Scouts SG. The last one was back in 2001, I guess? We were only given 3 hours, and we made the best out of it.

The event was ran by a group of super enthusiast hams, each to their own merits! Even the XYLs (wives) lend a hand to make this a wonderful one.

We made sure the scouts get full engagement and exposure during the activities, as you can see they are the ones holding the radio most of the time.

Nevertheless, well done to the team!

The first hams in Singapore came from Britain and they arrive in the 1930s. They were assigned the callsign prefix VS1. Hams in the Federated Malaya States were assigned VS2.

After World War II, several Radio Societies were formed in Malaya. The state of Perak had a society, Selangor had a society and there was the Malayan Amateur Radio Transmitters Society or MARTS.

In 1949, while under the administration of the Federation of Malaya (1948 to 1957), the Singapore Amateur Radio Transmitting Society (SARTS) was formed and registered. SARTS and the other smaller societies were later absorbed into MARTS which was the largest of the radio societies in Malaya.

On 31 August 1957, the Federation of Malaya gained independence from Britain and being a new country, new entity, they were assigned the 9M prefix.

On 9 August 1965, Singapore separated from Malaysia, and we became an independent country. Being another new country, new entity, we were assigned the 9V prefix which is in use till today.

Singapore Hams continued to be part of MARTS until it was decided that it was better for Singapore Hams and Malaysia Hams to have separate societies. The separation was an amicable one.

On 26 August 1968, the present day SARTS was formed. The first president of SARTS was Livin de Souza. The Society continues on till today.

The object is for Oceania transmitting stations to contact as many stations as possible inside and outside the Oceania region.

Non-Oceania transmitting stations to contact as many stations as possible inside the Oceania region.

Exchange: RST report plus a progressive contact serial number starting at 001 for each band. Multiplier is the number of different valid prefixes worked (may be counted once on each band.